I will talk about ICU research on premature babies and the effects of manual therapy on vital signs controlled by the vagus nerve.

In particular, I will present data from 6 years of research in which we explored how oxygen saturation and heart rate can change in relation to certain manual stimuli.
I will also discuss how different gestational ages and prematurity can affect vagal function and its critical windows of development. 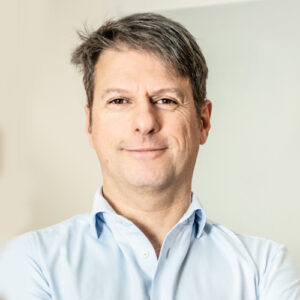 Andrea Manzotti FT DO Physiotherapist since 1990 and Osteopath since 1997, specialized in sports and neonatology / pediatrics

In 2004 he inaugurated the first pediatric and neonatal osteopathy clinic of the ASST hospital of Vimercate, the first hospital in Italy to provide this service.
Since 2012 he has been working in the intensive care unit of the Vittore Buzzi children’s hospital in Milan as a clinician and head of osteopathic research.
Since 2013 in charge of a two-year training course for osteopaths who want to train in the field of pediatric osteopathy.

Engaged in the dissemination of osteopathy in the various fields of specialist medicine, he is a spea- ker at numerous conferences in the pediatric-neonatology anddentistry fields.

Also as a trainer he participates in the training of dentists interested in collaborating with osteopaths, in particular in the field of child dentistry.

Author of two books in the pediatric field and of 15 publications on indexed scientific journals.

Contract professor for the two-year Master’s in osteopathic medicine at the University of Ferrara for pediatric disciplines in 2017/2019
He had a Masters in Biostatistics for Clinical Research and Scientific Publishing, Padua University.