Problems registering for a course? Send us an email via info@pro-osteo.com

Fascia forms a body-wide interconnected network of fibrous collagenous connective tissues. This network envelops and connects all organs, muscles, nerves and vessels. While being largely neglected in the past, the fascial web recently gained new scientific attention based on new measurement technologies. New research findings suggest that fascial tissues significantly influence muscular force transmission; they also form the basis of perception of our own body (proprioception) as well as of many myofascial pain syndromes.

This workshop begins with an update on new insights regarding the biomechanical functions of the body-wide fascial network. This background will then be applied to a new understanding for treating several common musculoskeletal dysfunctions around the thorax.

In addition to cutting edge research information from a body worker’s perspective, the workshop will include specific hands-on instruction on different approaches and working techniques aimed at stimulating specific sensory receptors in fascia (Ruffini-, Golgi-, Pacini and interstitial endings) as well as providing adequate fluid shear to fascial fibroblasts in order to influence their metabolic behaviour.

This will include work on the dense layer of the Fascia Profunda (‘diving suit’), on muscular septae, and on adhesions within the “Superficial shearing zone” at the bottom of the Superficial Fascia. During many of these techniques, the clients will be instructed to support the hands-on work with active micro movement participations from the inside, thereby making the tissue work more specific, more cooperative and more sustainable. Guidelines for the best orchestration of such micro movement participations will be given and integrated into clinical sessions.

Approximately 50% of the workshop will focus on a multitude of practical and very detailed hands-on instructions. These will aim primarily to releasing myofascial pathologies around the thorax and include among others: 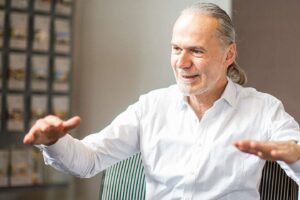 Robert Schleip PhD MA directs the Fascia Research Project of Ulm University in Germany. Having been a Rolfing instructor and Feldenkrais practitioner for over 20 years, he felt frustrated with the speculative nature of scientific explanations backing up most areas of current bodywork. When he entered the field of connective tissue science as an active laboratory researcher in 2003, he became so thrilled that he soon became one of the driving international forces in the newly emerging field of fascia research. His own research findings on active contractile properties of human fasciae have been honored with the Vladimir Janda Award of Musculoskeletal Medicine. He is research director of the European Rolfing Association, and co-­‐initiator of the 1st Fascia Research Congress hosted at Harvard Medical School (Boston 2007) as well as of the subsequent congresses